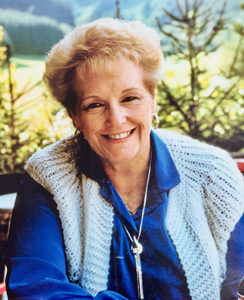 Rae Dorough was a catalyst for the cultural arts in Livermore.

The ‘Rae’ Dorough Speaker Series is named for longtime Livermore resident and supporter of local cultural arts, the late Raellen Dorough. Rae was a founding member of Del Valle Fine Arts and gave generously of her time and money to cultural, civic and educational causes over many years. She and her husband, Gus Dorough, endowed a chair in Chemistry at UC Berkeley.

Inquisitive by nature, Rae is remembered as being well informed about a breadth of interests from the arts, movies and literature to news and politics.  She particularly enjoyed Herb Caen’s column in the San Francisco Chronicle. Because she read voraciously on the topics that interested her, her family came to refer to her as the “information superhighway” in an era well before the ubiquity of Google searches.

Rae loved politics, championed women’s rights and was a staunch advocate for the arts. Friends and family appreciated her congenial warmth, love of lively discussion and dry wit. “Rae was witty, wise, very kind, lots of fun and much loved by many people,” Susan Mayall, a longtime family friend, told The Independent in 2008. “She was an amazing source of knowledge on all things cultural and we miss her enormously.”

Driven by a strong work ethic, Rae worked in the 1950s and 1960s at Kaiser Steel and later as an administrative assistant in the Chemistry Department at Lawrence Livermore National Laboratory. In the 1970s, she embarked on a real estate career and was a highly successful realtor and broker for more than 30 years. The last 15 years she was co-owner of the highly regarded Valley Properties firm.

Rae raised four children and was stepmother to three others. She died unexpectedly from post-operative complications on Feb. 26, 2008, just shy of her 75th birthday.

Because Rae was an enthusiastic supporter of the Oakland Paramount Theater’s acclaimed Oakland Speaker Series, initiating a Livermore series in her name seemed a fitting tribute. Her friends, with support of the family, launched the Rae Dorough Speaker Series in the fall of 2008 to honor her work for the community and as a reflection of her broad cultural interests and political convictions.

The creation of the series fulfilled an ambition of what was in 2008 the new Bankhead Theater. Len Alexander, executive director of the Livermore Valley Performing Arts Center at the time, noted: “From the earliest planning stages it was hoped the new theater would host an illustrious lecture series, and we are honored that the Dorough family helped us create The Rae Dorough Speakers Series to accomplish that goal.”